Built in the 7th century, the main settlement of Amorgos, ‘Chora’, dominates the centre of the island. This traditional mountain village stretches around the Castle that used to serve for defense purposes in the old times. The numerous labyrinth-like narrow alleys invite you to wander and discover them, in order to enjoy the simple architecture of its houses in perfect harmony with the environment. 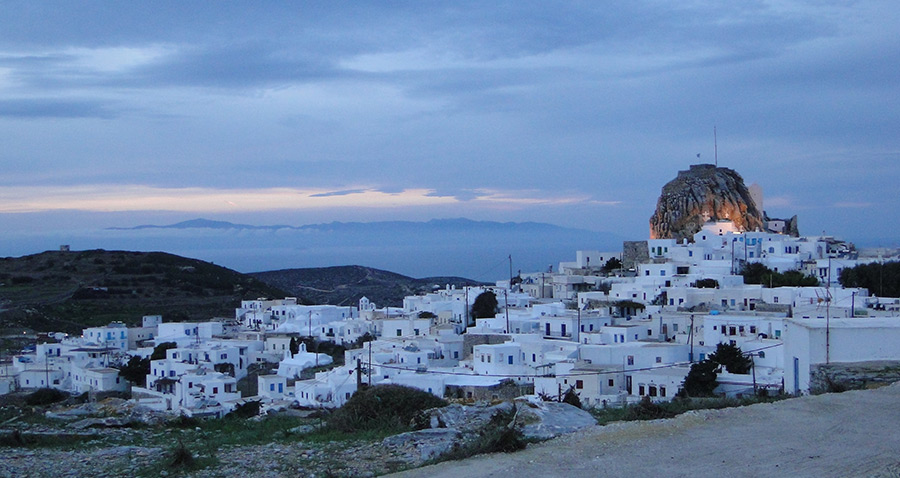 In the centre of Chora, we find a splendid example of Venetian architecture, the Gavras’ Tower, which today houses the archaeological collection of Amorgos. In the Church Museum ‘Archbishop Christodoulos’, near the cathedral, we can admire valuable artefacts collected from the old temples of Amorgos. A short walk to the windmills that dominate the top of the village, will reward you with a magnificent panoramic view of the dominant deep blue sea. 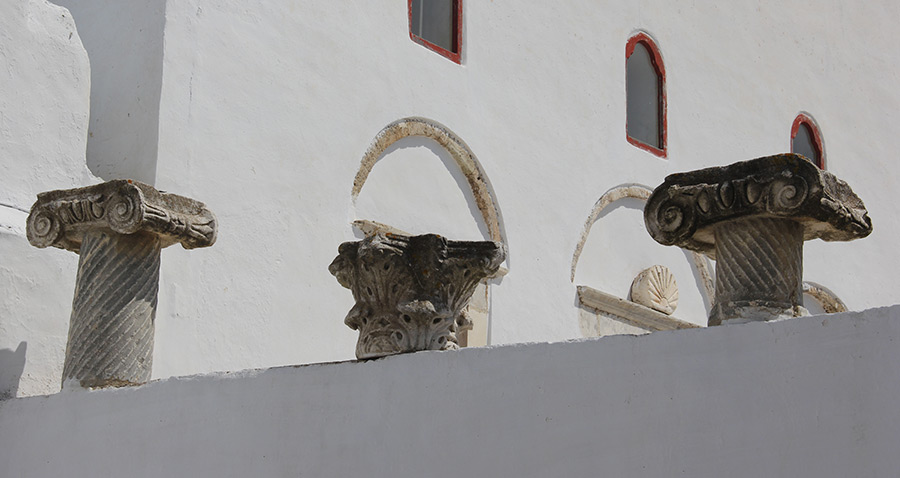 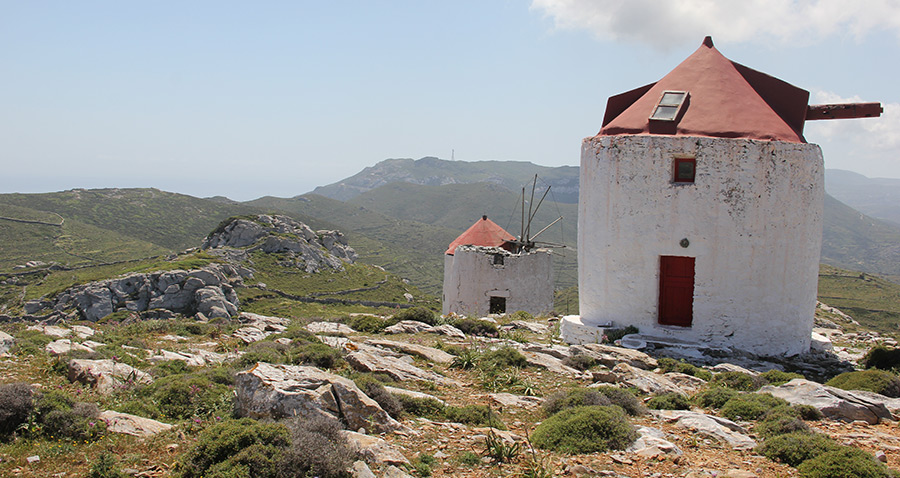 The Monastery of Panagia Chozoviotissa 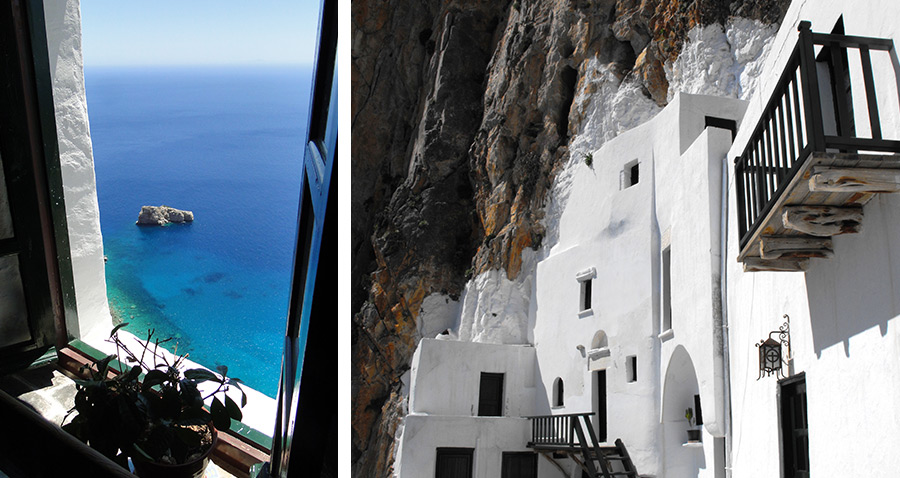 The monastery of Panagia (Virgin) Chozoviotissa is actually hooked on the east cliffs of the island. With a width of just a few metres, the eight floors of the monastery are carved into the rock. The numerous monks' cells, the Altar, the galley kitchen, the oven space, the warehouses, the wine presses, the cisterns and the wells compose an admirable specimen of anonymous folk architecture. The dating of the monastery is closely connected with its name. The arrival of the icon of Chozoviotissa and the construction of the first building core is dated back to the 9th century. 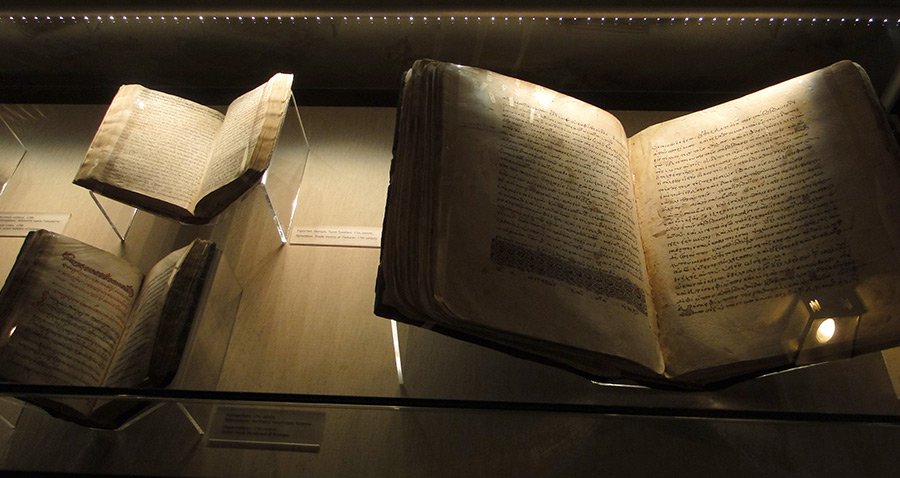 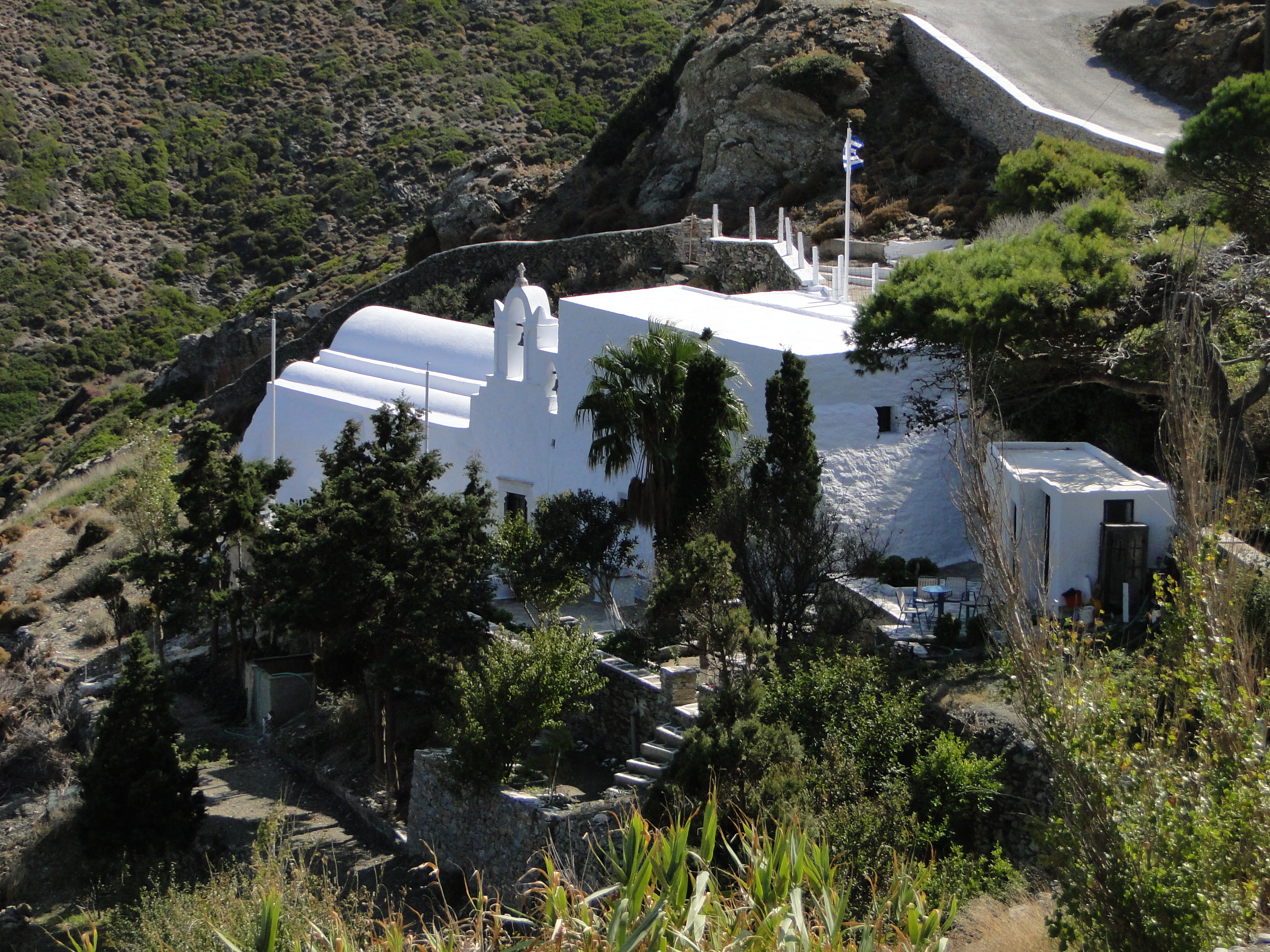 Moving south from Chora, heading towards Kato Meria, within a distance of a few kilometers, the Monastery of Saint George Balsamitis raises on your right hand. This building complex, a monumental church architecture ensemble with a rich history of the Byzantine times, the last few years is hosting a nun who will be happy to show you around the site. The famous Valsamiti springs have transformed the landscape into a little 'oasis' while within walking distance, on a nearby hill, you can find the Ruins of a Venetian Tower. 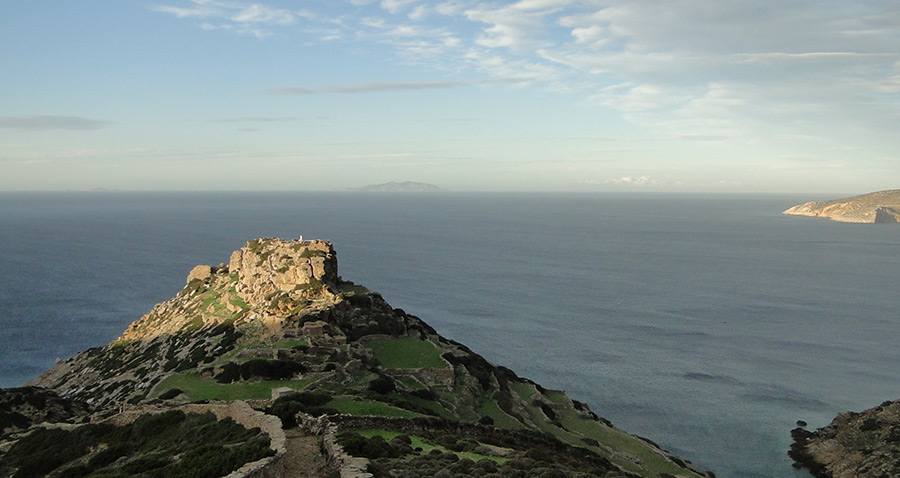 As we continue our journey to Kato Meria, the acropolis of Ancient Arkesini deserves our special attention, since it is the third city that flourished in Amorgos during ancient times; its ruins are preserved on the Kastri hill, with the impressive fortifications (4th century BC), that disappear and reappear among contemporary stone walls. The access is by a path that starts from the village Vroutsi and takes about 25 minutes. 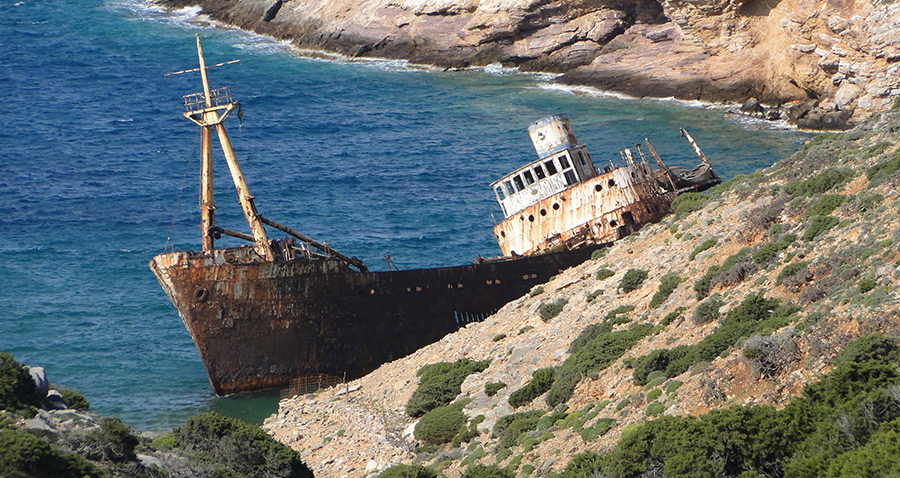 Shortly before Kalotaritissa, which is the southwestern end of the island, in a small bay on our right we find the wreck of the ship 'Olympia'. Her half sunk keel provided a perfect scenery for the shooting of the film "Big Blue", the most part of which is taking place in Amorgos. 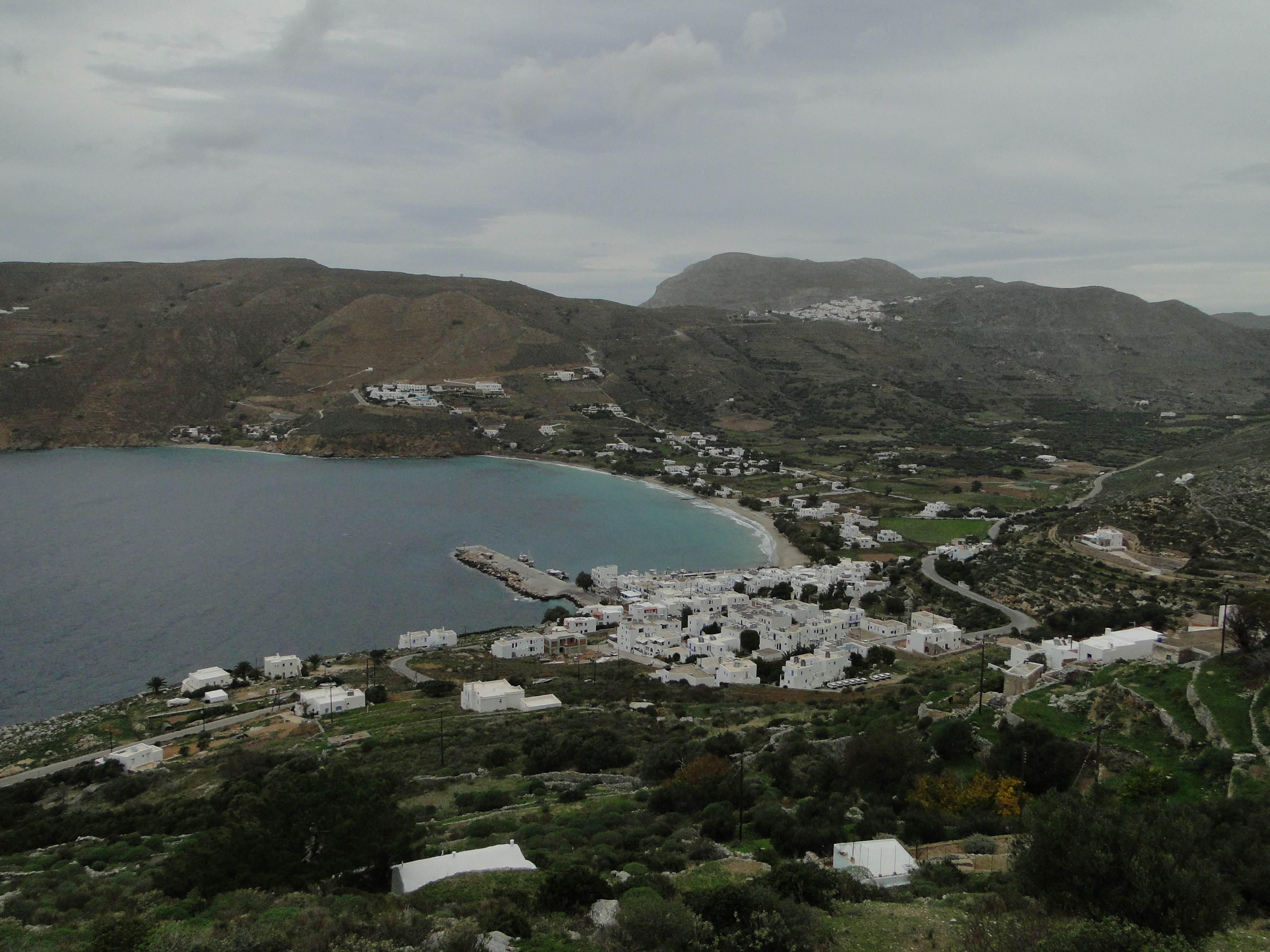 Aegiali, the second port of the island, is situated on the north side of the island. Three beautiful Cycladic villages, Tholaria and Potamos and Langada are amphitheatrically arranged above the harbour. The acropolis of Ancient Aegiali used to be where now stands the location Vigla, outside the village of Tholaria. 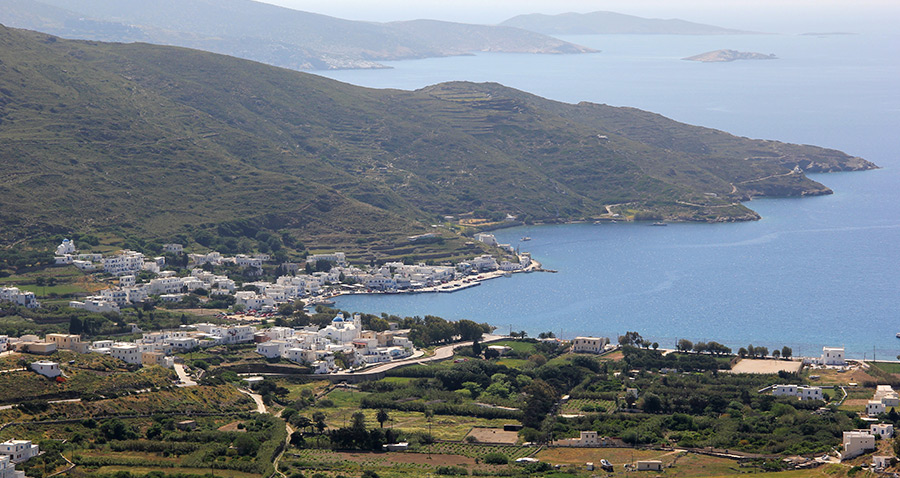 Reaching the natural, well-protected bay of Katapola, which is the main port of Amorgos, we meet three settlements, Katapola Rahidi and Xylokeratidi.

On the foundations of an early Christian basilica stands the church of Panagia (Virgin) Katapoliani, surrounded by columns and other ancient architecture remains.

The acropolis of Ancient Minoa 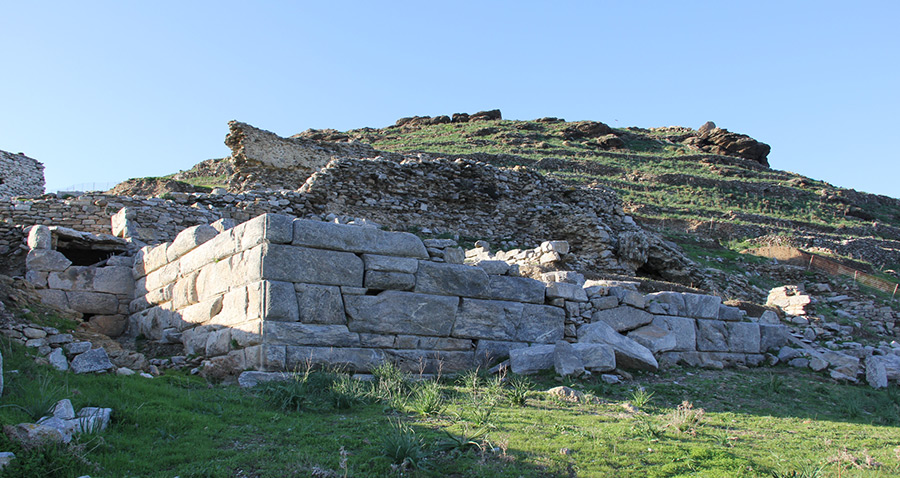 On the hill of Moudoulia, just above Katapola there is the acropolis of Ancient Minoa, with preserved ruins of one of the three ancient cities of Amorgos. According to archaeological research and the important discoveries of excavations, it seems that the town Minoa was inhabited since the Neolithic era. 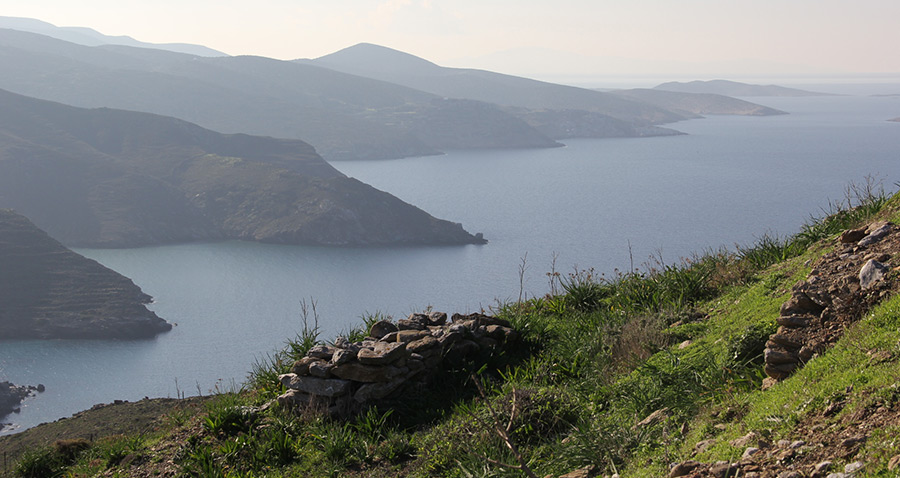 The fishing tradition and the maritime history of this place are genuinely preserved in Xylokeratidi. The village has the privilege of being protected from the north wind, while the southwest orientation grants us the amazing colours of the sunset. The unique picturesque houses that almost touch the sea, along with the fishermen’s colourful wooden boats, decorate the northeast corner of the bay of Katapola. 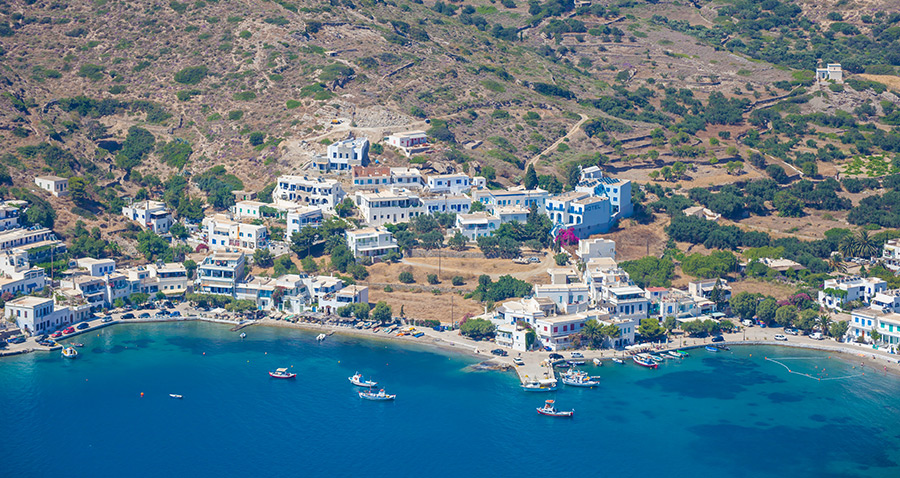 The terraced walkway that passes in front of our hotel, leads from the village to the vaulted tombs of the Mycenaean period (13th-12th century BC) to the location Katiforida, while just a few meters from the hotel, the excavations of a Mycenaean settlement continue.